Everton are on the slide after a strong start to the season, and Rafa Benitez’s Anfield connections mean that patience may be in short supply.

When the final whistle blew at the end of the match between Manchester City and Everton, there was little debate about the final score-line. Manchester City hadn’t so much blown Everton away as steamrollered them in a win that reinforced a) the gap between the top three and the rest, and b) that Everton’s hopes of getting into the Champions League this season were probably never going to amount to very much.

At the eye of this hurricane is Rafael Benitez, a manager who was always going to be cut short shrift by Evertonians if things started going wrong at Goodison Park. Rafa is, of course, a former Liverpool manager, and it was under him that they won their first European Cup in more than 20 years. But back in September, the mocking from the red half of Merseyside felt a little misplaced when they had a good start, winning four and drawing one of their first six games.

But since drawing at Old Trafford against Manchester United at the start of October, Everton’s season has fallen somewhat off the rails. They’ve only managed a single point since that game, and that came against a Spurs team that had been imploding and had only just been taken over by Antonio Conte. In the space of just over two months they’ve fallen from fourth place in the Premier League to 11th, and with injuries starting to mount, it’s beginning to feel as though this could be a tough winter for Everton.

This all makes for troubled times for Rafael Benitez, even though he’s only been in the job for a few months. Everton’s recent bad run has included games against two of the top four, but they also shipped five goals at home to Watford and there was chaotic defending and arguing on the pitch in losing at Wolverhampton Wanderers, while they were knocked out of the Carabao Cup by Queens Park Rangers after a penalty shootout.

Benitez wasn’t exactly given the best of chances when he arrived at the club in the summer. Everton’s previous managers had all been significantly backed in the transfer market, but the well seems to have run dry as soon as Benitez arrived at Goodison Park. Premier League Financial Fair Play rules were catching up with the club, and they could only spend £1.7m in the summer to bring in Demarai Gray from Bayer Leverkusen. Of the club’s other five summer signings, four were free transfers while the other was an academy player. 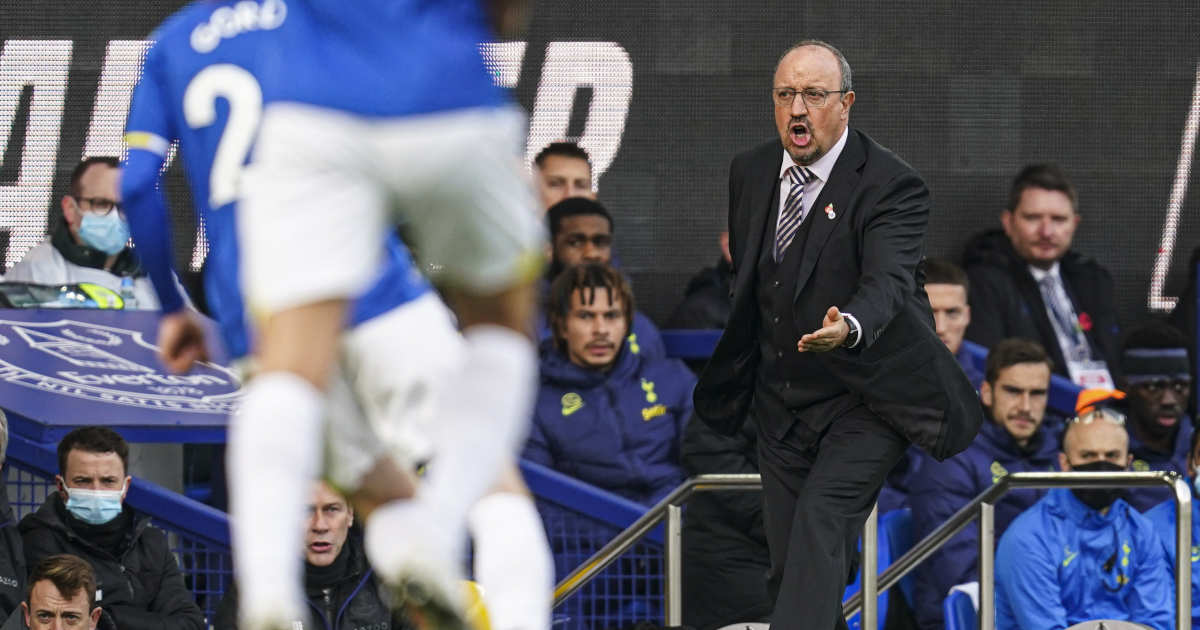 Perhaps predictably, Gray is now on a treatment table which has also played host to Dominic Calvert-Lewin, Abdoulaye Doucoure, Yerry Mina, Andre Gomes and Tom Davies. Benitez’ reaction was to bring in Cristian Fernandez as First-Team Rehabilitation Fitness Coach from Newcastle United in October, though Gray’s injury seems to indicate that there are limits to his powers. But injuries can only carry so much of the blame for Everton’s recent poor form. Defending, in particular from set-pieces, has been weak, while Benitez’s zonal system doesn’t seem to be working well with the players.

But the disorganisation starts at the top. There is no doubt that Farhad Moshiri has been a heavy spender in the transfer market. Since he took over the running of the club in 2015, he has spent more than £450m trying to bridge that gap to the ‘big six’, but it’s difficult to conclude that his attempts have been anything but a failure.  The latest set of company accounts showed losses of £139.8m (of which just over £67m could be pinned on the pandemic), while the previous two years showed losses of £13.1m and £111.8m. Everton deny rumours that there will be no money to spend on new players in January, but the raw numbers seem to indicate that money will continue to be tight, if the club is to stay within Premier League FFP rules.

The club has taken steps to get closer to moving to a new stadium at Bramley-Moore Dock, and this has the potential to be financially transformational for the club, with the new stadium having a capacity more than 13,000 greater than Goodison Park and other commercial opportunities also becoming available, but piling work only started on the new stadium in October 2021 and it won’t be ready until the start of the 2024/25 season. Everton are going to have to keep their books balanced until that point.

The problem that faces Benitez is that his Anfield connections don’t buy him much goodwill at Goodison Park. It’s pretty straightforward to get behind a manager when things are going well, as they were for Everton at the start of the season, but that well of goodwill was pretty thin to begin with, and with three of their next five matches coming against Liverpool, Arsenal and Chelsea, it’s far from guaranteed that they’ll improve much this side of Christmas. And if that is to be the case, it’s worth wondering how long the patience of the owners of the club will last. It seems strange to be even mentioning this with just three months of the season played, but six have gone since the start of October, so it can hardly be considered implausible that Benitez’s stay with Everton might turn out to be quite brief too.

But if there are fingers to be pointed at Goodison Park, they need to be aimed in a lot of different directions. Rafael Benitez has found himself in a trickier situation than he perhaps might, but the team is his ultimate responsibility, while the playing squad itself barely looks fit for purpose, especially considering recent injuries.

Of the senior management, Farhad Moshiri has run roughshod over any idea of responsible behaviour since he became involved and is now paying the price in the restrictions they face in the transfer market, while Bill Kenwright has been on the club’s board of directors for more than 30 years and has been chairman for more than 17. All that his chairmanship seems to have brought is further stagnation. Everton seem trapped in a world of their own making, unable to escape. The optimism of those first few weeks of the season already feel like a very long time ago indeed.