A critical look at the past week in boxing

Mark Magsayo deserves credit for his victory over Gary Russell Jr. on Saturday in Atlantic City.

The talented protégé of Manny Pacquiao did what it took to defeat the longest-reigning titleholder in boxing by a majority decision, realizing his dream of become a world champion in the process.

Let’s face it, though: The more-impressive performance was turned in by the 33-year-old Russell, who fought one-handed after aggravating a shoulder injury in the fourth round.

Russell, a southpaw, said he has had problems with his right shoulder for many years but fought through it. He said he first aggravated the injury a few weeks ago. And then, when he landed a right hand during the fight, he rendered the arm useless.

Some fighters might’ve quit at that point. Not Russell. He fought eight-plus rounds using only his left hand and guile against a younger, world-class opponent bent on taking his 126-pound title.

He somehow was able to land enough shots to be competitive and used his still-formidable skill, quickness and athleticism to avoid many of Magsayo’s punches, although the challenger clearly found the target more than he did.

Again, we must acknowledge that Magsayo (24-0, 16 KOs) earned his first world title fair and square. We also have to call Russell’s performance what it was: remarkable. 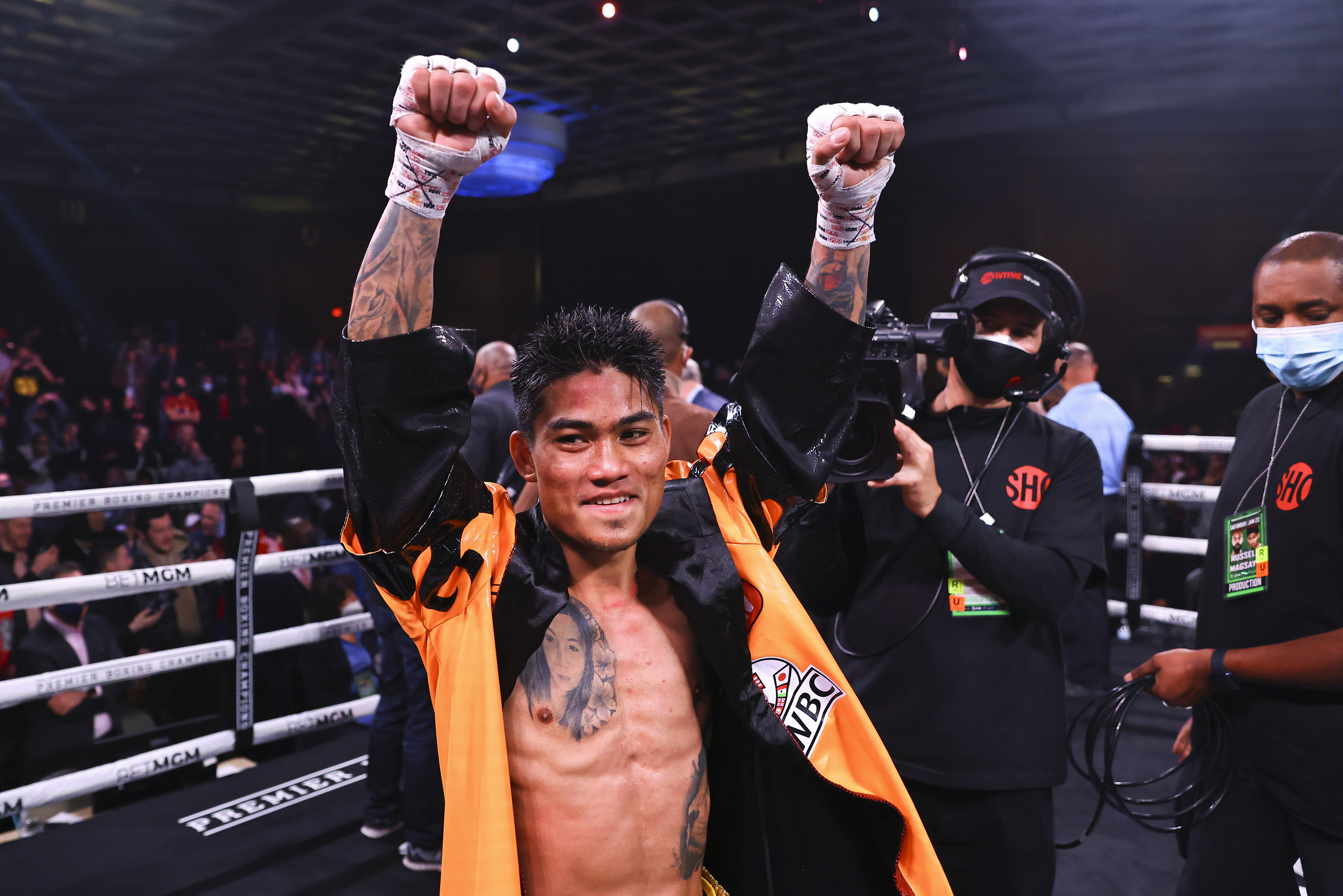 When Russell grimaced after landing the right hand that re-injured his shoulder in the fourth round, it seemed as if the end for Russell was near.

Either he’d indicate that he couldn’t use his right arm and retire or Magsayo, facing crippled prey, would overwhelm Russell and end the fight in short order. Neither of those things happened.

Russell decided to give it a go in spite of his handicap. And Magsayo couldn’t find a way to take charge. To be clear, he did enough to win, which is the name of the game. And if a fighter as quick and clever as Russell decides he isn’t going to get hit, it’s difficult to hit him under any circumstances.

That said, Magsayo is a world-class boxer with quick hands himself and a 2-1 advantage in arms available. Russell threw zero jabs –zero! – from the sixth round on. You’d think the challenger would’ve stepped on the gas and run Russell over. Instead, he almost lost.

The good news for Magsayo is he’s still developing under trainer Freddie Roach, who has worked with him for only four fights. As Magsayo learned from spotty performances against Rigoberto Hermosillo and Julio Ceja, he’ll learn from the Russell fight.

Could he beat a healthy Russell in a rematch?

I doubt it given what we saw from the fourth round on but I think he’d be competitive. One, he gave a two-handed Russell problems with his quick hands and effective counterpunching for three-plus rounds. And, two, he will be a better fighter as a result of the experience he gained Saturday.

Magsayo has a lot going from him. His best might be ahead of him.

Tugstsogt Nyambayar, a 2012 Olympic silver medalist, was a hot featherweight contender early in 2020. Today, after going 1-2-1 in his last four fights, the Los Angeles-based Mongolian’s career as an elite fighter might be over.

Nyambayar (12-2-1, 9 KOs) fought to a split-decision draw against Sakaria Lukas (25-1-1, 17 KOs) on the Russell-Magsayo card, a stunning result given the fact that the Namibian took the fight on short notice and is a relative unknown.

That followed a one-sided loss to Russell, a split-decision victory over Cobia Breedy and another unanimous-decision setback against Chris Colbert.

On Saturday, Nyambayar allowed the capable Lukas to dictate the pace much of the fight, using a stiff jab, straight rights and high work rate to fight his favored opponent on even terms – at least.

And had an apparent knockdown of Nyambayar in the eighth round been ruled as such instead of a slip, he would’ve lost for the third time in four fights. Replays seemed to indicate that the referee made a mistake.

Nyambayar, 29, isn’t finished. He can still turn his career around. However, he needs to figure out what has been lacking and make corrections as soon as possible or he could fade into obscurity.

Meanwhile, Lukas, who has campaigned in North America the past few years, put himself on the boxing map with his performance on national TV. We’ll probably see him in another important fight soon.

Junior welterweight contender Sabriel Matias (18-1, 18 KOs) also turned in a good performance on the Russell-Magsayo card, breaking down and then stopping Petros Ananyan after nine rounds. Ananyan (16-3-2, 7 KOs) had upset Matias by decision in 2020.

Matias, fit and as physical as always, simply imposed his will on a durable opponent in an entertaining brawl. This version of the Puerto Rican would be a handful for anyone. 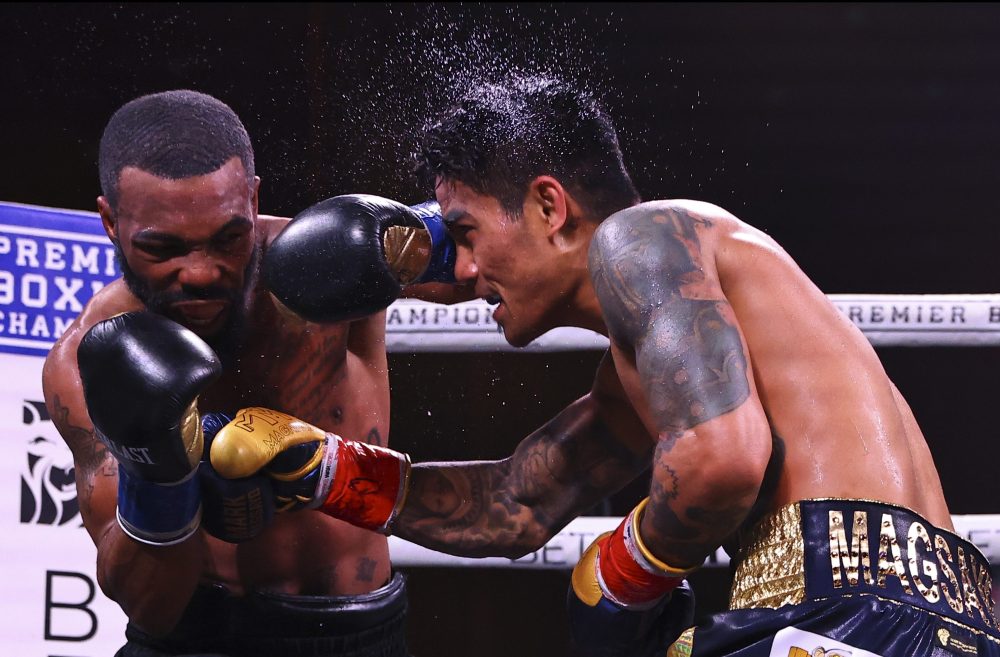 Daniel Jacobs Vs. Jaime Munguia In The Works

Ryan Garcia: Gervonta Davis is the most exciting fight for me