Matteo Berrettini says that, as a kid, he often dreamed of facing Rafael Nadal in the business end of a Grand Slam.

That very scenario became a reality in 2019, when competing in his first major semi-final, Berrettini took the court against Nadal at the US Open. He would fall in straight sets, 6-7(6), 4-6, 1-6, though the match would prove pivotal when it came to elevating his inner-belief. Now the 25-year-old Roman, a career-high No. 7 in the ATP Rankings, will get another semi-final shot at Nadal when he faces the Spaniard on Friday at the Australian Open.

“It’s a great opportunity for me. I’ve watched him so many times in this tournament, in other tournaments, cheering for him,” said Berrettini, who outlasted Frenchman Gael Monfils in a thrilling three-hour, 49-minute quarter-final, 6-4, 6-4, 3-6, 3-6, 6-2. “I really want to win this match. I know I can do it. It’s going to be a really tough one, but I’m in the semis of a Slam for the third time, so it means that this is my level.”

Reflecting on his last-four matchup against Nadal in Flushing Meadows, Berrettini said it was then — even in defeat — that he truly began to believe he was capable of winning big titles.

“Before my semi at the US Open, I didn’t really think that I could have done so much. Not because I didn’t believe, but just because I came from a mentality that I took every step day by day,” he said. “I was never the guy who said, ‘I’m going to turn pro, then I’m going to win a Slam.’ Then, when I made the semis, I said, ‘I want to do it again. I want to try to go further.’” 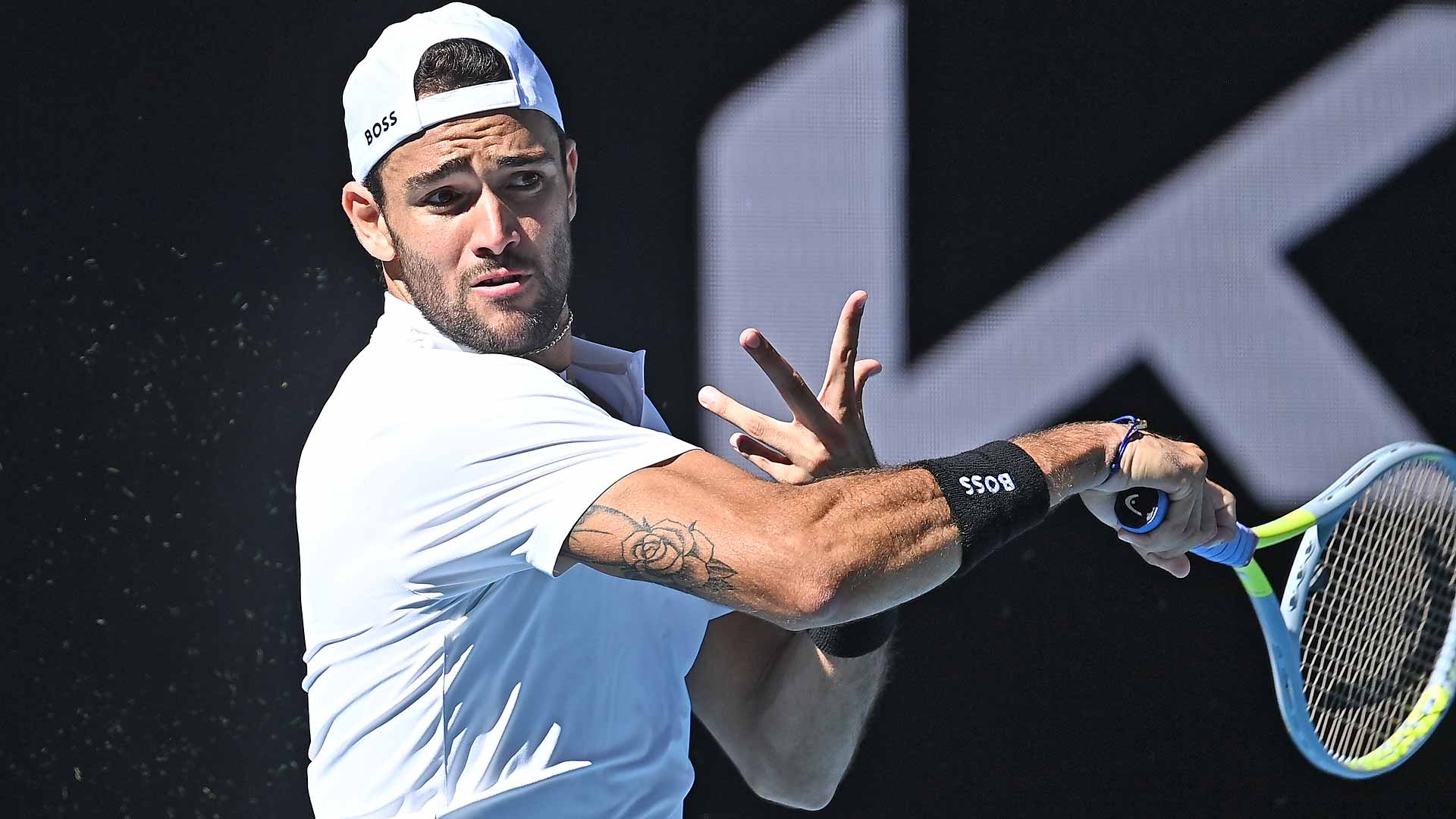 Matteo Berrettini” />
Photo Credit: Peter Staples/ATP Tour
The first-ever Italian man to reach the semis at the Australian Open is clearly relishing his latest accomplishment, especially knowing all that it means to those back in his homeland.

“It makes me super-proud,” said the 2021 Wimbledon finalist. “I don’t think it’s wrong to say that I’m writing Italian tennis history. We are a great country for tennis. We’ve had, in the past, some great champions. It’s an honour for me and a pleasure stepping on the court and having the chance to have these kinds of results. I’m feeling a lot of love from Italy, from my fans, from my family, all the people that saw me growing up.”

Like Berrettini, Nadal needed five taxing sets to get through his quarter-final, edging Canada’s Denis Shapovalov, 6-3, 6-4, 4-6, 3-6, 6-3, in four hours and seven minutes, a match that he said left him all but “destroyed”.

Chasing a record 21st major singles title, a number that would break up a deadlock with rivals Roger Federer and Novak Djokovic, both of whom are watching from the sidelines, the 25-year-old Mallorcan should benefit from a two-day buffer between the quarters and semis.

“I think it’s important to have these two days off after a brutal match out there,” said Nadal, whose 2021 campaign was cut in half by a foot injury. “The conditions were hard.” 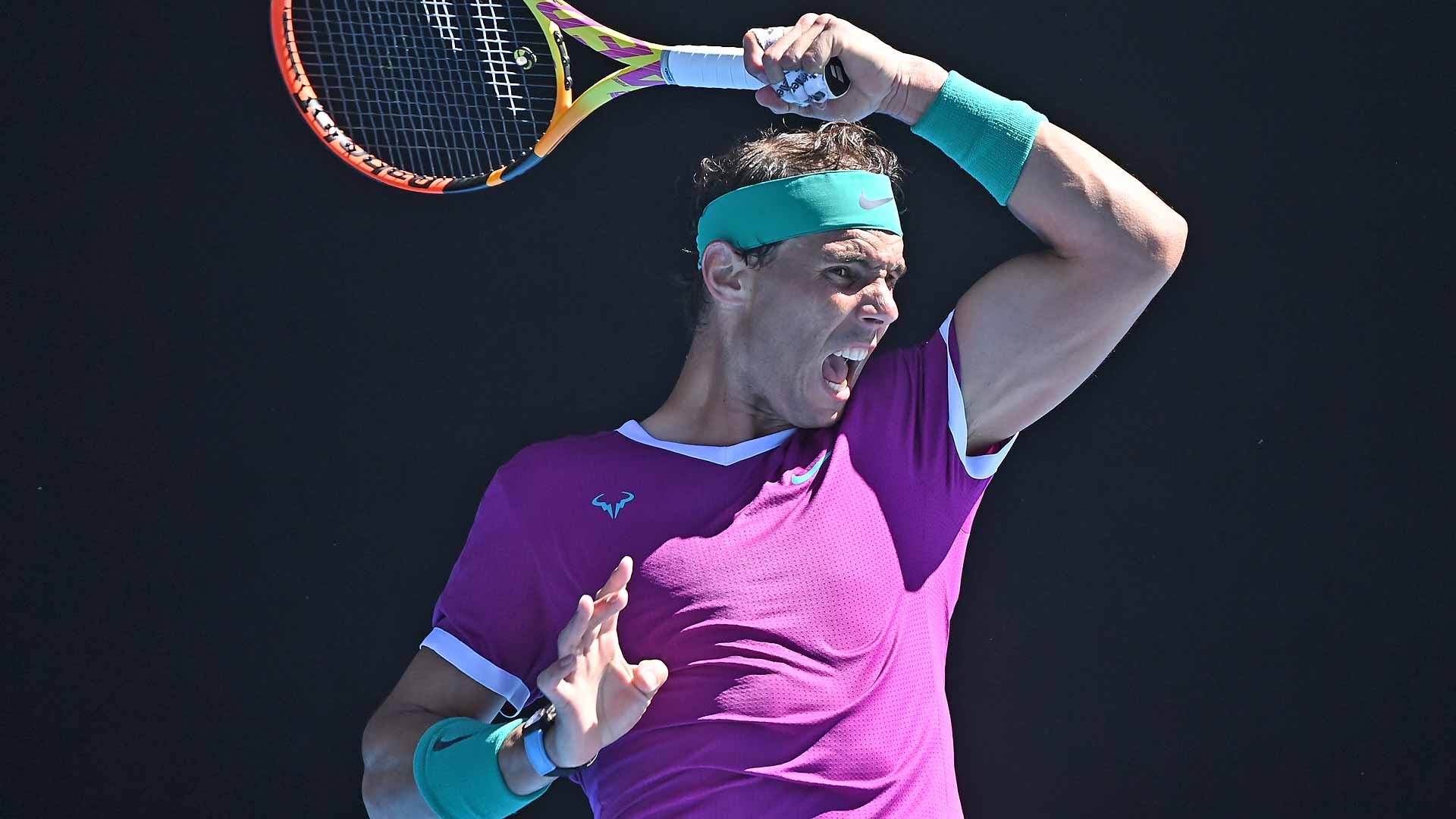 Rafael Nadal” />
Photo Credit: Peter Staples/ATP Tour
Having jump-started his return to the Tour with a title run at the Melbourne Summer Set in Week 1, and now a spotless 8-0 on the year, Nadal will need all his reserves if he’s going to prevail against the heavy-hitting Berrettini in his seventh Australian Open semi-final.

“Matteo is one of the best players in the world,” said Nadal, the 2009 champion. “He’s very solid. I need to play at 100 percent, my highest level if I want to keep having chances to fight, to be competitive, to try to be in the final. But to be able to be in the semi-final of a Grand Slam after everything I’ve been through is a lot of positive energy for me.”

Nadal insists it’s his love of the sport, not his record-book pursuit alongside Federer and Djokovic, that continues to motivate him some two decades after he turned pro.

“The fact that we are equal at 20, the only thing it says is that we share an amazing era in the history of our sport,” said the World No. 5. “It’s a real honour to be part of it, without a doubt. I don’t hope for anything. I just keep going. I’m just enjoying playing tennis. Of course, I want to keep winning. But more than wanting to achieve or have more than the others, it’s because I love what I am doing. I want to keep doing this as long as possible. In the past six months, there have been a lot of doubts whether I would be able to keep going. But now I feel good. I’m in the semi-finals of the Australian Open — that’s amazing for me.

“In terms of what’s going to happen in the future? Honestly, I don’t care that much. I don’t believe that my future happiness is going to depend on if I achieve more Grand Slams than the others, or the others achieve more Grand Slams than me. I am super-satisfied and I feel very lucky as a person in general for all the things that have happened to me in this life. I have a way of approaching life: You can’t always be frustrated if the neighbour has a bigger house than you, or a better phone, or better things. I’m not going to be frustrated if Novak or Roger finishes their careers with more Grand Slams than me. Let’s enjoy the situation that we have. Every one of us has done very special things in our sport.”